Like I mentioned in my last post, I'm a bit behind, so this is catch up. Did some fun events and parties, so here are the photo Highlights. The giraffe is what the birthday girl wanted...originally was going to be a full face cheeta, but she just loved the giraffe.  The Snake was a very popular design in febuary. One of my febuary partys was almost entirely tigers and snakes, Unfortunatyl my Camera ran out of juice at that party, so this snake was from the giraffe party.
Funny story: The part where the birthday girl was the racoon, everybody decided they wanted fangs at the end to every design including the racoon. They claimed they were all vampire racoon/snake/colored tigers. I literally Painted 12-14 tigers, 4 snakes, a racoon and a couple flowers. the tigers were blue and pick and purple and orange...etc...I really had wished I had a full camera for that event.
Later in Febuary I took a trip for my March 10 yr. anniversary. We saw the very last Launch of the space shuttle discovery, as well as went to see world  and swam with dolphins at Discovery Cove. What does it have to do with facepainting? not much, though I did paint myself most days, but it's fun, and I thought I would include it to add variety to my Blog! 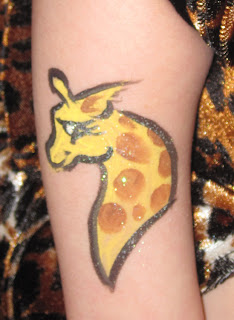 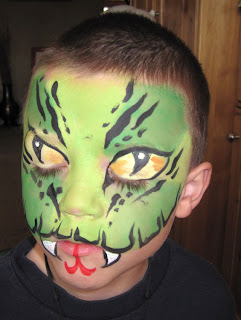 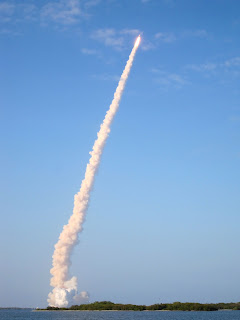 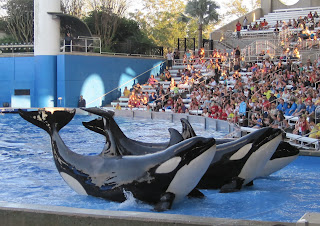 me as a racoon 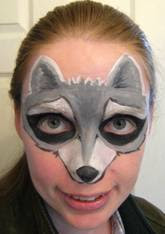 Call for a quote for your event or visit my webpage. The Number Listed is a LANDLINE, so unfortunately it can't take Texts, But I would love to receive a call about your event inquiry.